I wrote a previous post about getting ready for my friend's son's Studenten. Gabriel is 19 and just graduated from gymnasium. Nineteen is the average age for finishing the Swedish equivalent of American high school. Except that gymnasium is more specialized in Sweden and students go to a school that specializes in an area the student wants to study, such as computer science or art or English.

We had some crazy weather last week including the coldest June 2nd in 84 years of Swedish weather. But the gods were good and there was no rain last Tuesday, despite the fact that there was a "70% chance" according to Weather Underground.

Gabriel's class came out of graduation which only the students attend at 1:30pm. The families stood outside the building, most waving signs with large pictures of the graduate as a little kid. I know that part of the reason for the signs (which are seen at every school's graduation) is so that the graduate can find his/her family in the crowd but also maybe there is a "awww, cute!" part and a "let's embarrass them" part as well. 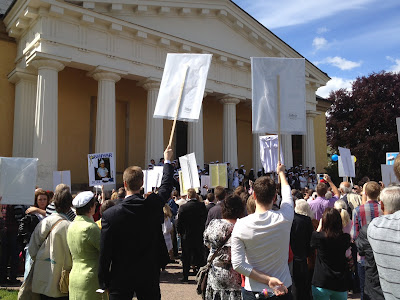 Another tradition is that the graduate wears all sorts of revelry around their neck, sort of like Mardi Gras. You can buy all sorts of "necklaces" in many stores at this time of year. The "necklaces" are small stuffed animals, plastic medals, figurines, balloons, candies, and more. Many graduates also ended up with small bouquets hanging from ribbons around their neck.

We expected approximately 80 guests and were not disappointed. My friends live next to the woods and unfortunately Tuesday was the first day I have seen the infamous Swedish mosquitoes this year. They suddenly appeared in droves--I suppose because there were all those victims. Anyway, the use of mosquito spray helped tremendously.

The food was wonderful and all made by hand--no caterers involved. We did have two women washing dishes for several hours which was invaluable because there were very few paper plates, plastic ware, etc. Swedes don't seem to use much of those, at least not at the parties I have been to. I worked my buns off running up and down the stairs, clearing places, restocking. It was really fun and I was glad to be able to do something for my friends after they let me stay so long with them when I first arrived in Sweden seven months ago.


The party was a huge success. Most people left by midnight but there was a small group that stayed and danced till around 3AM. I was able to see the sun come up at approximately 3:30AM. I am definitely going to have to blog about how light it is all the time at this time of year!
Posted by Kristin, Hanna & Lily at 5:31 AM

Check out the blog I wrote about working in Sweden for Sweden.se. I published over 70 posts... http://blogs.sweden.se/work/